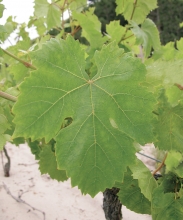 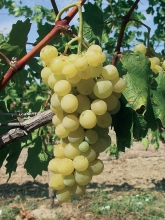 This variety was obtained in 1916 by Jean Mathiasz in Hungary by crossbreeding Dattier de Beyrouth and Perle de Csaba.
Synonyms

In France, Reine des Vignes is officially listed in the "Catalogue of vine varieties" on the A list. This variety is also listed in the catalogues of other Member States of the European Union: Austria, Croatia, Hungary, Italy, Portugal and Spain.
Use

The identification is based on:
- the tip of the young shoot with a low density of prostrate hairs,
- the green young leaves with bronze spots,
- the circular adult leaves, entire or with three or five lobes, with shallow lateral sinuses, an open U-shaped petiole sinus, medium teeth with straight or convex sides, those corresponding to the main veins are a little longer, no or a very weak anthocyanin coloration of veins, a smooth slightly twisted leaf blade, and on the lower side of the leaves, a low density of erect hairs and no or a very low density of prostrate hairs,
- the ellipsoid berries with a muscat or simple flavor.
Genetic profile

Reine des Vignes is a weak variety with a semi-erect or horizontal bearing. This variety is susceptible to millerandage and can be pruned short or long. Reine des Vignes tends to produce many grappillons.
Susceptibility to diseases and pests

The bunches are medium to large size and moderately compact. The berries are large with a juicy pleasantly flavored pulp.
Clonal selection in France