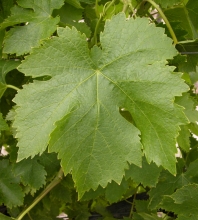 This table grape variety was obtained in California by H.P. Olmo and A.T. Koyama.
Synonyms

In France, Red Globe is officially listed in the "Catalogue of vine varieties" on the A list. This variety is also listed in the catalogues of other Member States of the European Union: Italy, Portugal and Spain.
Use

The identification is based on:
- the tip of the young shoot with no prostrate hairs,
- the young leaves that are green with bronze spots or copper,
- the red-striped shoots,
- the wedge-shaped or pentagonal adult leaves, with three or five lobes, lateral sinuses with overlapping lobes, a not very open V- or brace-shaped petiole sinus, numerous moderately long teeth compared to their width at the base with convex sides, no anthocyanin coloration of veins, a smooth, flat or slightly twisted leaf blade, and on the lower side of the leaves, no erect and prostrate hairs,
- the round-shaped or slightly ellipsoid berries.
Genetic profile

Bud burst: 2 days before Chasselas.
Grape maturity: mid-season, 3 weeks and a half after Chasselas.
Suitability for cultivation and agronomic production

Red Globe is moderately vigorous, averagely fertile but highly productive and has a semi-erect bearing. Red Globe foliage density is moderate, which provides a homogeneous coloration of grapes, without the necessity of leaf removal prior to harvest. The clusters keep well on the vine trunk but they can be sensitive to dessication and burning depending on their exposure.
Susceptibility to diseases and pests

Red Globe is moderately sensitive to downy mildew and powdery mildew. However, this variety is very susceptible to phomopsis.
Technological potentiality

Red Globes’s bunches are large and loose, with a long peduncle. The berries are large to very large, simple-flavored, with a lot of bloom, a moderately thick to thick skin and a firm, not very juicy pulp. The grapes have a good cold storage and transport capacity.
Clonal selection in France