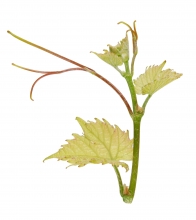 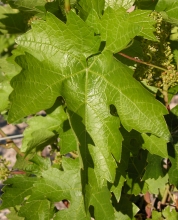 Rayon d’Or (an interspecific hybrid) is the result of a crossbreeding between 405 Seibel and 2007 Seibel.
Synonyms

In France, this variety can officially be called "4986 Seibel" regarding plant propagation material.
Legal information

The identification is based on:
- the tip of the young shoot with a medium density of prostate hairs,
- the green young leaves,
- the small pentagonal adult leaves, with five or seven lobes, deep lateral sinuses, a slightly open or closed with overlapping lobes U-shaped petiole sinus, large teeth, not numerous, short compared to their width at the base with convex sides, an involute, funnel-shaped, smooth and shiny leaf blade, and on the lower side of the leaves, a low density of erect hairs,
- the round-shaped berries
Genetic profile

Rayon d’Or is fairly fertile and can be pruned short or moderately long. It is best to trellis this variety.
Susceptibility to diseases and pests