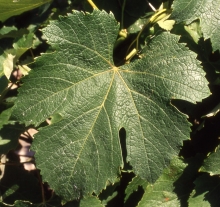 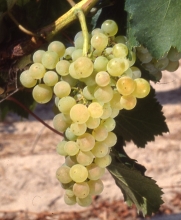 This variety is originally from the south west of France and based on published genetic anayses, it is probably a descendant of Gouais blanc and Bouchalès.
Synonyms

In France, Raffiat de Moncade is officially listed in the "Catalogue of vine varieties" on the A list and classified.
Use

The identification is based on:
- the tip of the young shoot with a high density of prostrate hairs,
- the green young leaves with bronze spots,
- the wedge-shaped or kidney-shaped adult leaves, with three lobes, an open U-shaped petiole sinus, teeth with convex sides, no anthocyanin coloration of veins, a shiny, involute and slightly blistered leaf blade, and on the lower side of the leaves, a medium to high density of erect and prostrate hairs,
- the round-shaped berries.
Genetic profile

This variety is fairly productive but has grape clusters which are not very compact.
Susceptibility to diseases and pests

The bunches are small to medium and the berries are very small. Raffiat de Moncade produces fairly neutral, warm and lively wines.
Clonal selection in France