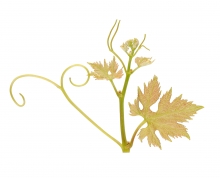 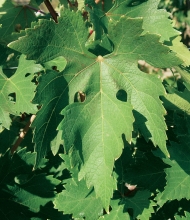 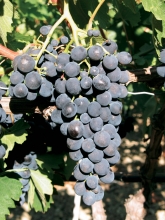 This variety was obtained in 1974 by INRA by crossbreeding Lival and Cardinal.
Synonyms

The identification is based on:
- the tip of the young shoot with a medium density of prostrate hairs,
- the green young leaves with bronze spots,
- the shoots with no or a slight anthocyanin coloration and with red-striped internodes,
- the circular or wedge-shaped adult leaves, with five or seven lobes, deep lateral sinuses, an open U-shaped petiole sinus, with often naked petiole veins, medium teeth with straight or convex sides, a moderate anthocyanin coloration of veins, a twisted finely blistered leaf blade, and on the lower side of the leaves, a low density of erect hairs and no prostrate hairs,
- the broad ellipsoid berries.
Genetic profile

Prima has a moderate vigor, with an erect or semi-erect bearing. This variety must be trellised and pruned short or moderately long. It is sensitive to coulure, millerandage and berry splitting.
Susceptibility to diseases and pests

Prima is not very sensitive to grey rot.
Technological potentiality

The bunches are medium, fairly loose with a long and not very lignified peduncle. The berries are medium to large in size and become intensely and homogeneously colored before the grapes reach full maturity. The skin is fairly thin and the pulp is firm, juicy with a neutral flavor and moderate organoleptic quality. Prima has a good storage and transport capacity.
Clonal selection in France

The only certified Prima clone carries the number 1022.
Bibliographic references