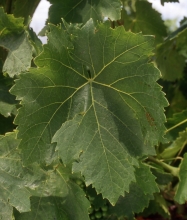 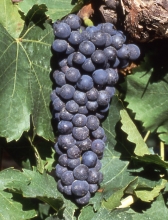 This variety would appear to originally be from Austria.
Synonyms

In France, Portugais bleu is officially listed in the "Catalogue of vine varieties" on the A list and classified. This variety is also listed in the catalogues of other Member States of the European Union: Austria, Croatia, Czech Republic, Germany, Hungary, Italy, Netherlands, Portugal, Romania, Slovakia and Slovenia.
Use

The identification is based on:
- the tip of the young shoot with a low density of prostate hairs,
- the green young leaves with slightly bronze spots,
- the adult leaves, entire or with three or five lobes, with shallow lateral sinues, a slightly open petiole sinus or with slightly overlapping lobes, medium teeth with convex sides, no anthocyanin coloration of veins, a thin shiny, fragile, involute, twisted, smooth and sometimes goffered leaf blade, and on the lower side of the leaves, no erect and prostate hairs,
- the round-shaped berries.
Genetic profile

The bunches are medium in size and the berries are large. Portugais bleu produces not very tannic, not very acidic and rather colored wines. The wines should be consumed quickly or as a primeur.
Clonal selection in France

The only certified Portugais bleu clone carries the number 939. A conservatory of 40 or so clones was planted in 2000 in the wine-growing region of Auvergne (Massif Central).
Bibliographic references