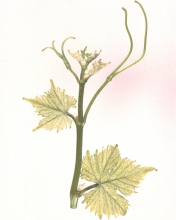 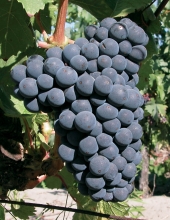 This variety obtained by INRA in 1958 is the result of the crossbreeding between Grenache and Portugais bleu.
Synonyms

In France, Portan is officially listed in the "Catalogue of vine varieties" on the A list and classified.
Use

The identification is based on:
- the tip of the young shoot with a low density of prostate hairs,
- the green young leaves,
- the pentagonal leaves with five lobes, shallow lateral sinuses, a petiole sinus with overlapping lobes, medium teeth with convex or straight sides, no anthocyanin coloration of veins, a twisted, goffered and blistered leaf blade, and on the lower side of the leaves, no or a very low density of erect and prostate hairs,
- the round-shaped berries.
Genetic profile

Bud burst: 1 day before Chasselas.
Grape maturity: early-season, half a week after Chasselas.
Suitability for cultivation and agronomic production

Portan is very vigorous. This variety must be trellised and preferably pruned long. It is suited to moderately or not very fertile soils.
Susceptibility to diseases and pests

Portan is susceptible to powdery mildew and phomopsis. However, as it is an early variety, it is not very sensitive to grey rot.
Technological potentiality

The bunches and berries are medium in size. Due to its earliness and its characteristics, Portan can be used to make primeur wines or wines to be consumed quickly. This variety produces not very tannic, well colored and fruity wines that have moderate alcohol degree.
Clonal selection in France

The only certified Portan clone carries the number 537.
Bibliographic references