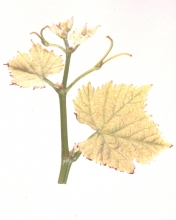 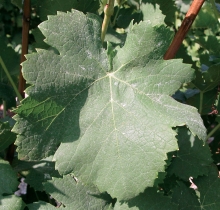 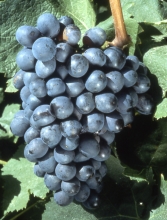 This variety is seemingly originally from the upper Durance Valley.
Synonyms

In France, this variety can officially be called "Espanenc" regarding plant propagation material.
Legal information

The identification is based on:
- the tip of the young shoot with a high density of prostrate hairs,
- the yellow young leaves,
- the adult leaves with three or five lobes, shallow lateral sinuses, a slightly open petiole sinus or with slightly overlapping lobes, with a fairly frequent tooth on the edges, medium teeth with straight or convex sides, no anthocyanin coloration of veins, a twisted leaf blade, and on the lower side of the leaves, a low density of erect and prostrate hairs,
- the ellipsoid berries.
Genetic profile

This variety, with an erect bearing, is well adapted to gobelet training. It is rather productive and fertile. It is drought resistant and not very susceptible to browning.
Susceptibility to diseases and pests

The bunches and berries are medium to large in size. Plant droit produces not very colored wines with low alcohol degree.
Clonal selection in France

The only certified Plant droit clone carries the number 1173. Surveys have recently been carried out in the wine-growing region of Provence.
Bibliographic references