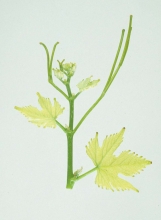 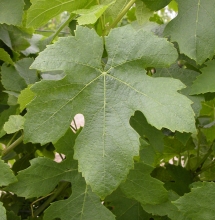 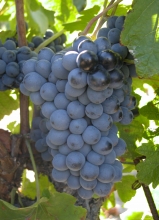 This variety was obtained by A.I. Perold in South Africa in 1925 and results from the crossbreeding between Pinot noir and Cinsaut.
Synonyms

In France, Pinotage is officially listed in the "Catalogue of vine varieties" since 2012 on the A list and classified.
Use

The identification is based on:
- the tip of the young shoot with a medium to high density of prostate hairs,
- the green young leaves,
- the wedge-shaped adult leaves, with five lobes, open lateral sinuses with a fairly frequent tooth inside, an open U-shaped petiole sinus with the a tooth inside, short teeth with straight sides, a finely blistered leaf blade, undulate between the veins, and on the lower side of the leaves, a low density of erect and prostate hairs,
- the clearly ellipsoid berries.
Genetic profile

Pinotage is moderately vigorous, rather fertile and productive, with an erect bearing. It can be pruned short. Its shoots are quite sensitive to the wind and thus this variety should be trellised.
Susceptibility to diseases and pests

Pinotage's bunches are small to medium in size, cylindrical, wide and compact, with a short peduncle. The berries are also small to moderate in size. This variety produces rather full-bodied, very typical wines, with a particular aromatic character. It is sometimes used to make rosé wines and even sweet wines.
Clonal selection in France

The only certified Pinotage clone carries the number 1186.
Bibliographic references