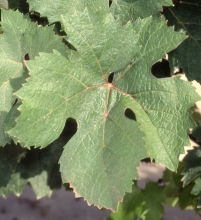 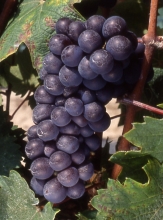 This variety is found in the Loire Valley region.
Synonyms

In France, Pineau d'Aunis is officially listed in the "Catalogue of vine varieties". on the A list and classified
Use

The identification is based on:
- the tip of the young shoot with a very high density of prostate hairs,
- the reddish young leaves with bronze spots,
- the shoots with red internodes,
- the circular adult leaves, with five lobes, a petiole sinus with slightly overlapping lobes, medium teeth with straight sides, a strong anthocyanin coloration of veins, an involute leaf blade, and on the lower side of the leaves, a medium to high density of erect and prostate hairs,
- the slightly ellipsoid berries.
Genetic profile

Pineau d’Aunis is a moderately vigorous variety, very susceptible to browning and fertile when pruned short. Its production sometimes tends to be irregular (alternates). Pineau d'Aunis is also sometimes susceptible to chlorosis.
Susceptibility to diseases and pests

As its grape clusters are compact, this variety is susceptible to grey rot. It is however not very sentive to phomopsis.
Technological potentiality

The bunches are medium in size and the berries are small. Pineau d’Aunis makes light and not very colored wines for the production of rosé wines or base wines for sparkling wines. The quality drops quickly when the yields increase.
Clonal selection in France

The two certified Pineau d’Aunis clones carry the numbers 235 and 289. A conservatory of 150 clones was planted in Vendomois (French department of Loir et Cher) in 1997.
Bibliographic references