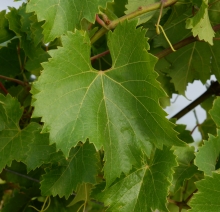 Phoenix was obtained by the Geilweilerhof institute in Germany, in 1964. This interspecific hybrid results from the crossbreeding of Bacchus and Villard blanc (12375 Seyve-Villard).
Synonyms

In France, Phoenix is officially listed in the "Catalogue of vine varieties" since 2015 on the A list. This variety is also listed in the catalogue of other Member States of the European Union: Austria, Denmark, Germany, Netherlands and Sweden.
Use

Phoenix is moderately to highly vigorous, fertile and has an erect bearing. This variety resists fairly well to winter frosts.
Susceptibility to diseases and pests

Phoenix is not very sensitive to powdery mildew and very little sensitive to downy mildew. However, it must be grafted and it is slightly susceptible to grey rot.
Technological potentiality

Phoenix’ bunches are small to medium and compact. The berries are medium in size, simple-flavored, with a thick skin and a moderately juicy pulp. Phoenix wines have a nice acidity and hebaceous and elderflower aromas.
Clonal selection in France