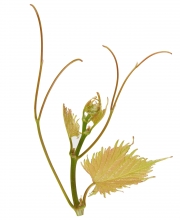 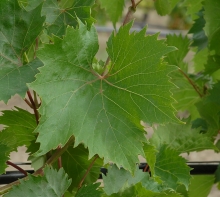 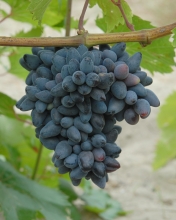 The variety Philipp was obtained by G. Weiss and G. Mayer in Austria. This interspecific hybrid results from the crossbreeding of Eger and Original.
Synonyms

In France, Philipp is officially listed in the "Catalogue of vine varieties" since 2013 on the A list.
Use

The identification is based on :
- the tip of the young shoot that is half-open or closed with a low density of prostate hairs,
- the green young leaves with bronze spots and no or a very low density of prostate hairs,
- the shoots with red internodes on the ventral side and red-striped internodes on the dorsal side,
- the circular or pentagonal adult leaves, with three lobes, an open U-shaped petiole sinus, very long teeth compared to their width at the base with straight sides or one side concave and one side convex, a medium to strong anthocyanin coloration of veins, a folded, goffered leaf blade, with no or a very low blistering, and on the lower side of the leaves, a low to very low density of erect and prostate hairs,
- the finger-shaped and very pointed berries.
Genetic profile

Philipp has a semi-erect to erect bearing and is moderately productive.
Susceptibility to diseases and pests

Philipp’s bunches are medium to large in size and compact. The berries are also medium to large, with a slightly colored, not very juicy and very firm pulp.
Clonal selection in France