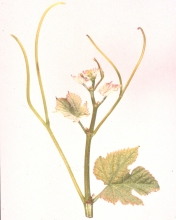 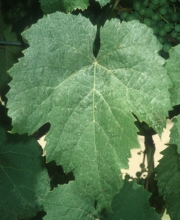 In France, Petit Verdot is officially listed in the "Catalogue of vine varieties" on the A list and classified. This variety is also listed in the catalogues of other Member States of the Europen Union: Bulgaria, Croatia, Cyprus, Italy, Malta, Portugal and Spain.
Use

The identification is based on:
- the tip of the young shoot with a high density of prostrate hairs,
- the yellow young leaves and tendrils,
- the shoots with green internodes,
- the cordate, matte, dark green adult leaves, with three lobes, a slightly open petiole sinus or with parallel edges, and occasionally with a tooth on the edge, short teeth compared to their width at the base with straight sides, no anthocyanin coloration of veins, a slightly revolute, blistered leaf blade, undulate between the veins near the petiole sinus, and on the lower side of the leaves, a medium density of prostrate hairs,
- the round-shaped berries.
Genetic profile

Petit Verdot is a fertile and rather productive variety. It grows soft shoots, fragile at the base, rather long, with horizontal bearing which need trellising. It is well adapted to gravelly soils. In southern areas, Petit Verdot requires regular watering. Formerly, some stumps were sensitive to coulure due to the presence of a stigma malformation. This characteristic has been eliminated in France with selection work.
Susceptibility to diseases and pests

This variety is a little sensitive to powdery mildew and mites.
Technological potentiality

The bunches are medium and berries are small in size. Petit Verdot, when fully ripe, can produce very powerful, rich, colored and tannic wines. These quality wines are suited to ageing, which, when blended, can provide body, color and liveliness to flat wines. Under favorable weather conditions, Petit Verdot can produce grapes that are rich in sugar while maintaining high acidity.
Clonal selection in France

The four certified Petit Verdot clones carry the numbers 400, 1058, 1273 and 1274. Three conservatories of approximately 150 clones in total were planted since 2002 in the Bordeaux wine-growing region.
Bibliographic references