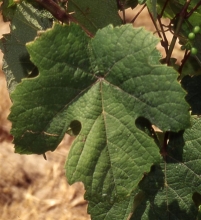 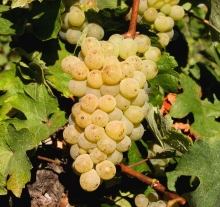 This variety is originally from the north of France and based on published genetic analyses, would be the result of crossbreeding Gouais blanc and Savagnin.
Synonyms

In France, Petit Meslier is officially listed in the "Catalogue of vine varieties" on the A list and classified.
Use

The identification is based on:
- the tip of the young shoot with a high density of prostrate hairs,
- the green young leaves with bronze spots,
- the shoots with red internodes,
- the small, circular adult leaves, with five lobes, open U-shaped lateral sinuses, a slightly open petiole sinus or with parallel edges, short teeth, a moderate anthocyanin coloration of veins, a matte blistered leaf blade, folded near the petiole sinus, and on the lower side of the leaves, a low density of erect and prostrate hairs,
- the round-shaped berries.
Genetic profile

Petit Meslier displays moderate vigor and early budburst which exposes it to spring frosts. It is also susceptible to millerandage and coulure. Preferance should be given to long pruning and planting in favorable and well-exposed terroirs.
Susceptibility to diseases and pests

The bunches and berries are small. Petit Meslier has a good sugar accumulation potential and a low juice yield. This variety produces dry white wines or base wines for good quality, fine and lively sparkling wines with interesting aromatic characteristics.
Clonal selection in France

The two certified Petit Meslier clones carry the numbers 1088 and 1195. A conservatory of 36 clones was planted in 2003 in the Champagne region.
Bibliographic references