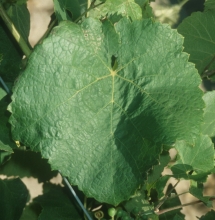 This variety is originally from the Pyrénées-Atlantiques region. Based on published genetic analyses, Petit Manseng would be closely related to Savagnin.
Synonyms

In France, Petit Manseng is officially listed in the "Catalogue of vine varieties" on the A list and classified. This variety is also listed in the catalogues of other Member States of the European Union: Bulgaria, Spain and Italy.
Use

The identification is based on:
- the tip of the young shoot with a very high density of prostrate hairs,
- the yellow young leaves with slightly bronze spots,
- the circular adult leaves, entire or with five lobes, with shallow lateral sinuses, a slightly open U-shaped petiole sinus or with slightly overlapping lobes, short teeth with straight or convex sides, a weak anthocyanin coloration of the petiole sinus, a slightly revolute leaf blade, and on the lower side of the leaves, a low density of erect and prostrate hairs,
- round-shaped berries.
Genetic profile

Petit Manseng is vigorous and must be trellised and pruned long.
Susceptibility to diseases and pests

This variety is very resistant to grey rot.
Technological potentiality

The bunches are small and the berries very small. Petit Manseng is remarkable in its great capacity to concentrate sugar in its berries while maintaining an extremely high acidity. Thus, this variety naturally produces aromatic and great quality liqueur wines.
Clonal selection in France

The four certified Petit Manseng clones carry the numbers 440, 573, 1107 and 1113. A conservatory of approximately a 100 clones has been planted in the wine-growing region of Jurançon (French department of Pyrénées-Atlantiques) in 1996.
Bibliographic references