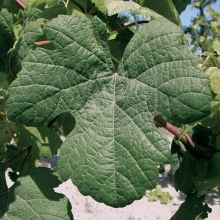 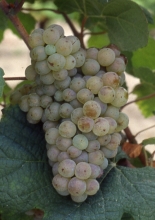 Petit Courbu is a native variety from the Pyrénées region.
Synonyms

The identification is based on:
- the tip of the young shoot with a very high density of prostate hairs,
- the reddish young leaves with bronze spots,
- the shoots with tendrils that wind around and cling on to each other,
- the medium, pentagonal adult leaves, with three or five, moderately deep and open upper lateral sinuses, a slightly open petiole sinus or with slightly overlapping lobes, very short teeth compared to their width at the base with convex or straight sides, a strong anthocyanin coloration of veins, a slightly revolute, strongly blistered and almost goffered leaf blade, and on the lower side of the leaves, a medium density of erect hairs and a medium to high density of prostate hairs,
- the round-shaped berries.
Genetic profile

This variety is not very productive and is generally pruned long.
Susceptibility to diseases and pests