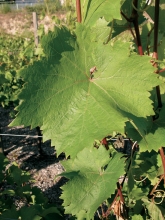 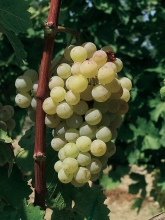 This variety was obtained in 1904 by A. Stark in Hungary. Based on genetic analyses carried out in Montpellier, this variety would be the result of the crossbreeding between Madeleine angevine and Muscat Fleur d’Oranger.
Synonyms

In the European Union, Perle de Csaba is officially called by other names: Csaba gyöngye (Hungary) and Cabski biser (Croatia). These synonyms are officially recognized in France regarding plant propagation material.
Legal information

In France, Perle de Csaba is officially listed in the "Catalogue of vine varieties" on the A list. This variety is also also in the catalogues of other Member States of the European Union: Austria, Bulgaria, Croatia, Denmark, Hungary, Italy and Portugal.
Use

The identification is based on:
- the tip of the young shoot with a medium density of prostrate hairs,
- the green young leaves with bronze spots,
- the circular, small adult leaves, entire or with three or five lobes, with shallow lateral sinuses, a slightly open U-shaped petiole sinus, small teeth with straight or convex sides, a moderate anthocyanin coloration of the petiole and a weak coloration of veins, a finely blistered, slightly twisted leaf blade, and on the lower side of the leaves, a medium density of erect hairs and no prostrate hairs,
- the round-shaped berries with muscat flavor.
Genetic profile

Perle de Csaba displays a low vigor and has a semi-erect to horizontal bearing. This early variety must be trained and can be pruned short or long.
Susceptibility to diseases and pests

The bunches are small to medium in size and compact. The berries are medium, with a thin or moderately thick skin, and a juicy pleasantly flavored pulp. This variety has bad storage and transportation capacity.
Clonal selection in France