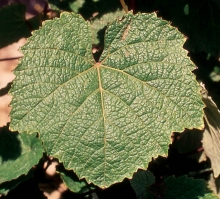 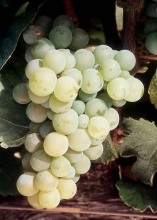 Based on published genetic analyses, this variety is probably a descendant of Gouais blanc. It appears to originally be from the Loire Valley, more particularly from Touraine or the Loir-et-Cher region.
Synonyms

In France, Orbois is officially listed in the "Catalogue of vine varieties" on the A list and classified.
Use

The identification is based on:
- the yellow young leaves with bronze spost and a high to very high density of prostrate hairs,
- the shoots with red internodes,
- the small adult leaves, entire or with shallow lateral sinuses, a slightly open or closed, V- or lyre-shaped petiole sinus, short teeth compared to their width at the base with convex sides, a strong anthocyanin coloration of veins, an involute, blistered leaf blade, undulate between the veins, and on the lower side of the leaves, a high density of erect and prostrate hairs,
- the slightly ellipsoid berries.
Genetic profile

Bud burst: 3 days before Chasselas.
Grape maturity: mid-season, 2 weeks and a half after Chasselas.
Suitability for cultivation and agronomic production

This variety has moderate vigor and good fertility.
Susceptibility to diseases and pests

Despite having very compact grape clusters, Orbois does not seem too susceptible to grey rot.
Technological potentiality

The bunches are medium to large in size and the berries are small. The sugar accumulation potential is relatively high for a fairly low acidity. It is especially used as a base wine to blend it with other grape varieties.
Clonal selection in France

The three certified Orbois clones carry the numbers 205, 206 and 504. A conservatory of twenty or so clones was planted 2007 in the French department of Loir-et-Cher.
Bibliographic references