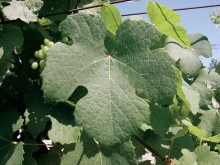 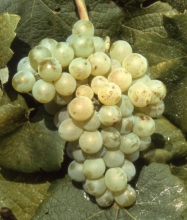 Ondenc is originally from the south west of France. Based on published genetic analyses, Ondenc would be closely related to Savagnin.
Synonyms

In France, Ondenc is officially listed in the "Catalogue of vine varieties" on the A list and classified.
Use

The identification is based on:
- the tip of the young shoot with a very high density of prostate hairs,
- the green young leaves,
- the adult leaves with three or five lobes, open U-shaped lateral sinuses, a slightly open petiole sinus or with parallel edges, short teeth compared to their width at the base with straight or convex sides, a weak to moderate anthocyanin coloration of veins, a flat leaf blade, and on the lower side of the leaves, a medium density of erect and prostate hairs,
- the ellipsoid berries.
Genetic profile

Ondenc is vigorous, fertile and can be pruned short. Its early budburst makes it prone to spring frosts. It is sometimes susceptible to coulure and tend to alternate.
Susceptibility to diseases and pests

This variety is especially susceptible to grey rot and sour rot. It is also quite sensitive to downy and powdery mildew.
Technological potentiality

The bunches and berries are medium in size. Ondenc produces rather fine wines, but that are not very aromatic. Under favorable conditions and possibly following passerillage, it is possible to obtain liqueur wines as Ondenc is an early variety. Moreover, distilling these wines produces good quality spirits.
Clonal selection in France

The three certified Ondenc clones carry the numbers 674, 675 and 676. A conservatory of 20 or so clones was planted in 1998 in the wine-growing region of Gaillac (French department of Tarn).
Bibliographic references