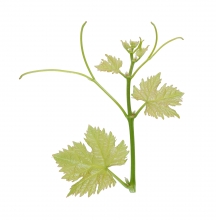 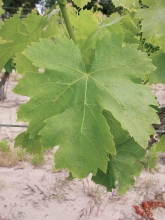 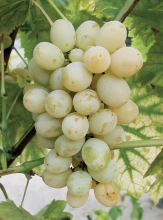 This variety is of unknown origin and does not correspond to the white form of Olivette noire.
Synonyms

In Italy, Olivette blanche is officially designated as "Ciminnita". This synonym is officially recognized in France regarding plant propagation material.
Legal information

The identification is based on:
- the tip of the young shoot with a low density of prostrate hairs,
- the green young leaves with bronze spots,
- the circular adult leaves, entire or with five lobes, with shallow lateral sinuses, an open V-shaped petiole sinus, small teeth, short compared to their width at the base with straight sides, no coloration of veins, a smooth shiny leaf blade, and ton the lower side of the leaves, no or a very low density of erect and prostrate hairs,
- the female flowers,
- the ellipsoid berries.
Genetic profile

Olivette blanche is a late-season variety, moderately vigorous with an erect or semi-erect bearing. It can be managed by long pruning. Due to its female flowers, Olivette blanche is very susceptible to coulure and millerandage.
Susceptibility to diseases and pests

The bunches are loose and small to medium in size. The berries are large, of irregular size due to millerandage, simple-flavored, with a thick skin and a fleshy pulp.
Clonal selection in France