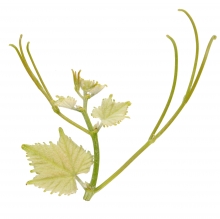 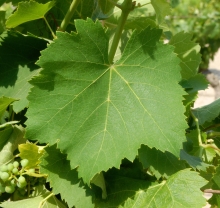 Noual seems to come from the French department Lot.
Synonyms

In France, Noual is officially listed in the "Catalogue of vine varieties" since 2018 on the A list and classified.
Use

The identification is based on:
- the white tip of the young shoot with a high density of prostrate hairs,
- the green yellowish young leaves, with a high density of prostrate hairs,
- the shoots with green internodes,
- the medium to large adult leaves, entire or with three lobes, a slightly open or closed V-shaped petiole sinus, small teeth, medium length compared to their width at the base with straight or convex sides, a moderate anthocyanin coloration of veins, an involute, finely blistered and sometimes slightly goffered leaf blade, and on the lower side of the leaves, a low density of erect and prostrate hairs,
- the round-shaped or slightly ellipsoid berries.
Genetic profile

Noual is productive and has a semi-erect bearing. Its late bud burst provides this variety a certain tolerance to spring frosts.
Susceptibility to diseases and pests

Noual is not very sensitive to grey rot.
Technological potentiality

Noual's bunches are medium to large and compact. The berries are medium in size, with a simple flavor, a moderately thick skin and a juicy pulp. The berries are difficult to detach from the pedicel. Noual wines are not suitable for ageing. They have low alcohol degree and bring freshness and liveliness when blended.
Clonal selection in France

There is no certified clone for this variety yet. A conservatory of 4 clones was planted in 2012 at the Departmental Farm of Anglars-Juillac in the French department of Lot.
Bibliographic references