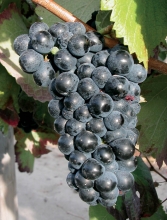 In France, Négrette is officially listed in the "Catalogue of vine varieties" on the A list and classified.
Use

The identification is based on:
- the tip of the young shoot with a high density of prostrate hairs,
- the green or yellow young leaves,
- the circular, dark green adult leaves, entire or with five lobes, with a petiole sinus with parallel edges and the secondary veins start near the petiole sinus, short teeth with convex sides, a flat, shiny, blistered and slightly revolute leaf blade, and on the lower side of the leaves, a low to medium density of erect hairs and a medium density of prostrate hairs,
- the round-shaped or very slightly ellipsoid berries.
Genetic profile

This variety, with its late budburst, shows good vigor and is sufficiently fertile when pruned short. However, its susceptibility to coulure or to millerandage may sometimes causes irregular production. Bunches peduncles are short. Négrette produces good results on boulbenes, gravelly and even sandy soils.
Susceptibility to diseases and pests

The bunches are small and the berries small to medium in size. This variety produces pleasant and fragrant wines that are rich in anthocyanin. As they are generally not very tannic and acidic, these wines lack liveliness and brillance. Their ageing capacity is limited so this wine should preferably be consumed quickly. Négrette also produces balanced rosé wines.
Clonal selection in France

The five certified Négrette clones carry the numbers 456, 580, 581, 582 and 663. A conservatory of 190 clones was planted in 1997 in the wine-growing region of Fronton (French department of Haute-Garonne). An other conservatory of fifty or so clones was planted in the French department of Vendée in 2012.
Bibliographic references