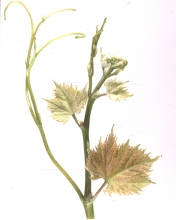 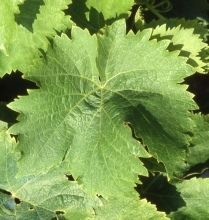 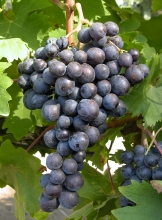 Based on published genetic analyses, this variety would be the result of crossbreeding Muscat d’Alexandrie and Frankenthal.
Synonyms

In France, Muscat de Hambourg is officially listed in the "Catalogue of vine varieties" on the A list. It is classified as a wine grape variety only in some French department (see the regulations in force). This variety is also listed in the catalogues of other Member States of the European Union: Bulgaria, Croatia, Cyprus, Germany, Greece, Italy, Hungary, Malta, Portugal, Romania and Spain.
Use

The identification is based on:
- the tip of the young shoot with a high density of prostate hairs,
- the young leaves with bronze spots,
- the adult leaves, with three or five lobes, an open petiole sinus, medium to large teeth, moderate to long compared to their width at the base with straight or convex sides, no anthocyanin coloration of veins, an involute, twisted and slightly goffered leaf blade, curly on the edges, and on the lower side of the leaves, a low density of erect and prostate hairs,
- the ellipsoid berries with muscat flavor.
Genetic profile

This variety has a moderate to strong vigor with a horizontal or semi- drooping bearing. The vines must be carefully trained and preferably planted in moderately fertile soil. Muscat de Hambourg is also rather sensitive to dessication of the stems.
Susceptibility to diseases and pests

Muscat de Hambourg is sensitive to powdery mildew, downy mildew, phomopsis, mites and grape moths. On the other hand, it is not very susceptible to grey rot.
Technological potentiality

The bunches and berries are medium to large. The berries have a moderately thick skin and a muscat flavored pulp. Muscat de Hambourg has a good storage capacity and moderate transport capacity. Muscat de Hambourg has low sugar and color potential. This variety can also be used to make still wines, sparkling wines and grape juice.
Clonal selection in France