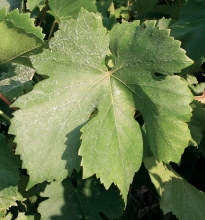 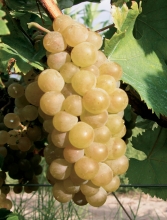 This variety was obtained in 1973 by INRA by crossbreeding Pinot gris and Muscat Ottonel.
Synonyms

In France, Muscat cendré is officially listed in the "Catalogue of vine varieties" on the A list and classified.
Use

The identification is based on:
- the tip of the young shoot with no or a very low density of prostrate hairs,
- the yellow or green young leaves,
- the circular or wedge-shaped, light green adult leaves, with three or five lobes, a slightly open petiole sinus or with slightly overlapping lobes and often a tooth on the edge, medium to short teeth compared to their width at the base with straight or convex sides, no or a weak anthocyanin coloration of veins, and on the lower side of the leaves, no or a very low density of erect and prostrate hairs,
- the broad ellipsoid berries with a very slight muscat flavor.
Genetic profile

Muscat cendré has a moderate to strong vigor with a horizontal bearing. This variety is not very sensitive to coulure and to millerandage.
Susceptibility to diseases and pests

The bunches and berries are medium in size. The sugar potential of this variety is average, with moderate to low acidity. Muscat cendré can produce powerful, full-bodied and slightly aromatic wines.
Clonal selection in France