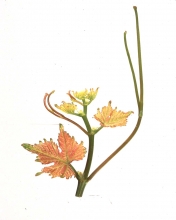 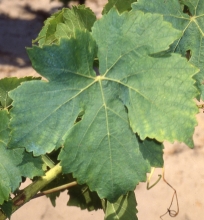 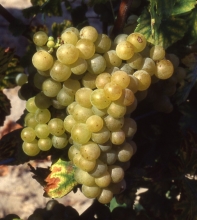 This variety was obtained by Mr Moreau-Robert in the 19th century. Based on genetic analyses carried out in Montpellier, it would result from the crossbreeding between Chasselas and Muscat d’Eisenstadt.
Synonyms

In the European Union, Muscat Ottonel is officially called by other names: Moschato Samou (Cyprus) and Ottonel muskotály (Hungary). These synonyms are officially recognized in France regarding plant propagation material.
Legal information

In France, Muscat Ottonel is officially listed in the "Catalogue of Vine Varieties" on the A list and classified. This variety is also listed in the catalogues of other Member States of the European Union: Austria, Bulgaria, Croatia, Cyprus, Czech Republic, Germany, Hungary, Italy, Luxembourg, Romania, Slovakia and Slovenia.
Use

The identification is based on:
- the tip of the young shoot with a low density of prostate hairs,
- the reddish young leaves,
- the shoots with red-striped internodes and long tendrils,
- the circular adult leaves, with three or five lobes, a slightly open or closed petiole sinus, short or medium teeth compared to their width at the base with convex sides, no anthocyanin coloration of veins, a flat, smooth leaf blade, with a low to medium density of erect hairs on the veins on the upper side of the leaves, and on the lower side of the leaves, a medium to high density of erect hairs
- round-shaped berries with muscaté flavor.
Genetic profile

Muscat Ottonel is an early and weak variety, with a horizontal bearing. Not very sensitive to chlorosis, it is well adapted to clay-limestone terroirs. However, it is sensitive to coulure.
Susceptibility to diseases and pests

The bunches are small to medium in size and the berries are medium to large. This variety has a good sugar potential and can produce aromatic dry wines and liqueur wines.
Clonal selection in France