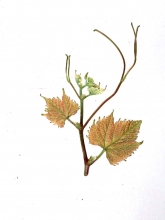 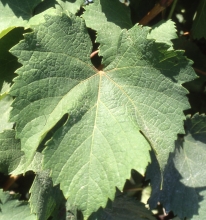 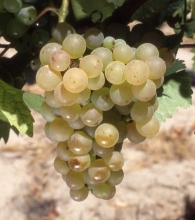 This variety is probably originally from the south west of France. Muscadelle can be found at trace levels in the center of France (Cher). Based on published genetic analyses, it is seemingly a descendant of Gouais blanc.
Synonyms

The identification is based on:
- the tip of the young shoot with a high density of prostrate hairs,
- the green young leaves with bronze spots,
- the wedge-shaped adult leaves, entire or with three lobes, an open U-shaped petiole sinus, long teeth compared to their width at the base with straight sides, a low anthocyanin coloration of veins, an involute leaf blade, and on the lower side of the leaves, a medium density of erect hairs and a low density of prostrate hairs,
- the round-shaped berries.
Genetic profile

This vigorous variety must be carefully trained and planted on well exposed plots in order to limit the risks of brotrytis bunch rot.
Susceptibility to diseases and pests

The bunches and berries are medium in size. Once maturity has been reached, Muscadelle can produce moderately alcoholic, not very acidic and slightly aromatic wines. These wines can sometimes be sensitive to oxidation.
Clonal selection in France