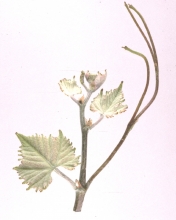 This variety is originally from Spain and was probably introduced in France at the end of the Middle Ages.
Synonyms

In the European Union, Mourvèdre is officially called by other names: Mataro (Cyprus) and Monastrell (Spain). These synonyms are officially recognized in France regarding plant propagation material.
Legal information

In France, Mourvèdre is officially listed in the "Catalogue of vine varieties" on the A list and classified. This variety is also listed in the catalogues of other Member States of the European Union: Crotia, Cyprus, Greece, Malta and Spain.
Use

The identification is based on:
- the tip of the young shoot with a very high density of prostrate hairs,
- the young leaves with bronze spots,
- the shoots with red colored internodes and an erect bearing,
- the circular adult leaves, entire or with three lobes, with a open lyre-shaped petiole sinus, large teeth, moderate compared to their width at the base with straight sides, a moderate anthocyanin coloration of veins, a flat leaf blade, and on the lower side of the leaves, a high density of erect and prostrate hairs,
- the round-shaped berries.
Genetic profile

Mourvèdre is a demanding variety and its growing is delicate. With its erect bearing and acrotonic nature, it must be pruned short. As such, it can be trained in cordon, with reduced trellis or in open gobelet. Care must be taken to maintain the non abundant foliage, that is moderately effective. Trimming must be avoided to limit the presence of large size grappillons, which then represent a bothersome competition. Production per vine trunk must be low to prevent risk of depletion. This variety sometimes demonstrates alternating fertility. The pedo-climatic requirements of Mourvèdre are very demanding. This variety appears well adapted to limestone soils deep enough to allow a limited but regular water supply. Potassium and magnesium supplies (K/Mg) must also be balanced in order to prevent the appearance of deficencies. Finally, the main limiting factor for growing this late variety (budburst and grape maturity), is that the temperatures at the moment of grape maturation must be very high (especially minimum temperatures) to enable proper ripening and a sufficient accumulation of sugar in the berries. This variety is thus reserved for the hottest southern areas and the best exposed.
Susceptibility to diseases and pests

Mourvèdre is sensitive to mites, vine leafhoppers, esca and sour rot. On the other hand, it is generally not very so susceptible to grey rot and it resists well againt phomopsis.
Technological potentiality

Mourvèdre's bunches are medium to large and the berries are medium in size. The color potential of this variety is moderate with sometimes a lack of acidity. Nevertheless, Mourvèdre can produce very high quality, aromatic, tannic and structured wines, suitable for ageing and maturing in wood barrels, provided that the grape maturity is sufficient (12 natural degrees minimum) and that the production per vine trunk is limited.
Clonal selection in France