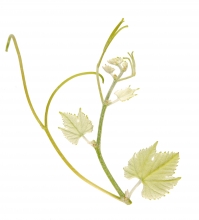 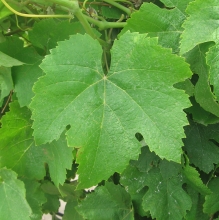 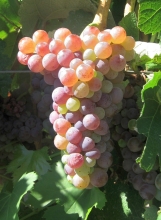 The identification is based on:
- the tip of the young shoot with a piping anthocyanin coloration and a very high density of prostrate hairs,
- the white or green yellow young leaves, with a high density of prostrate hairs,
- the shoots with red-striped internodes,
- the large adult leaves, with three or five lobes, shallow lateral sinuses, a slightly open or closed V-shaped petiole sinus, large teeth, short compared to their width at the base with convex sides, a weak anthocyanin coloration of veins, an involute, strongly blistered leaf blade, undulate between the veins and sometimes folded near the petiole sinus, and on the lower side of the leaves, a medium to high density of erect and prostrate hairs,
- the round-shaped berries that become light pink verging on grey when ripe.
Genetic profile

Moschofilero is a very vigorous and productive variety, with an erect bearing. It must be pruned short to manage the yields. The pollarding should be as late as possible during the season, to avoid having large grappillons. This variety may sometimes be susceptible to coulure and millerandage.
Susceptibility to diseases and pests

Moschofilero is sensitive to vine leafhoppers but is not very susceptible to powdery mildew.
Technological potentiality

Moschofilero's bunches and medium to large in size. The berries are medium, with a slightly aromatic flavor, a moderately thick skin and a juicy pulp. The berries are rich in terpenes, and the wines are finely aromatic, with a barely muscat flavor. They are usually light, fresh with a low alcohol degree. The wines can have a very light pink tint. Moschofilero's typical aromas are rose, lychee, citrus, quince and marzipan.
Clonal selection in France

The only certified Moschofilero clone carries the number 1253.
Bibliographic references