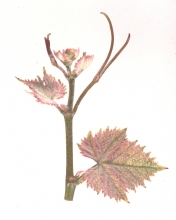 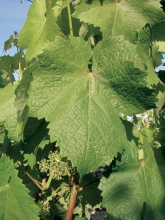 This variety is of Spanish origin and where it is called Graciano.
Synonyms

In France, this variety can officially be called "Minustellu" regarding plant propagation material. In the European Union, Morrastel is officially called by other names: Cagnulari (Italy), Graciano (Spain, Malta) and Tinta Miuda (Portugal).
Legal information

In France, Morrastel is officially listed in the "Catalogue of vine varieties" on the A list and classified. This variety is also listed in the catalogues of other Member States of the European Union: Italy, Malta, Portugal and Spain.
Use

The identification is based on:
- the tip of the young shoot with a high density of prostate hairs,
- the reddish-orange or yellow young leaves with bronze spots,
- the shoots with red-striped internodes,
- the pentagonal or circular, dark green adult leaves, with three or five lobes, a petiole sinus with overalapping edges, short teeth with straight sides, a weak to moderate anthocyanin coloration of veins, a slightly revolute leaf blade, and on the lower side of the leaves, a medium density of erect hairs and a medium to high density of prostate hairs,
- the round-shaped berries.
Genetic profile

This variety with a semi-erect to erect bearing is well suited for limestone soils, hillsides terroirs and drought conditions. It can be pruned in gobelet. Given its long growing cycle, it must be planted in sufficiently warm areas.
Susceptibility to diseases and pests

Morrastel is sensitive to vine leafhoppers and sometimes to grey rot.
Technological potentiality

The grape clusters are moderate to large and the berries are small. Morrastel produces tannic, slightly astringent, full-bodied (peppery flavor) and well colored wines. The sugar accumulation potential for this variety remains nevertheless low or moderate.
Clonal selection in France