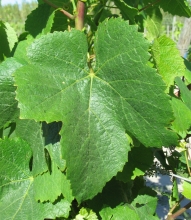 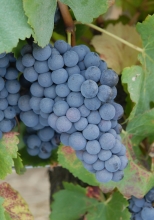 This variety is seemingly originally from the Rhône region and used to constitute the basis of the Gier Valley (Loire) vineyards.
Synonyms

In France, Mornen is officially listed in the "Catalogue of vine varietie" since 2011 on the A list and classified.
Use

The identification is based on:
- the tip of the young shoot with a medium density of prostrate hairs,
- the green young leaves with bronze spost or entirely bronzed,
- the small or medium, entire, circular adult leaves, with a slightly open or closed V-shaped petiole sinus, medium teeth, short compared to their width at the base with convex sides, no or a weak anthocyanin coloration of veins, a flat leaf blade, and on the lower side of the leaves, no or a very low density of erect and prostrate hairs,
- the round-shaped or sometimes slightly obloid berries.
Genetic profile

Mornen is fairly vigorous, with an erect bearing, and can be pruned short. It is well adapted to granitic sand soils.
Susceptibility to diseases and pests

Mornen's bunches are small to medium in size and the berries are medium in size. This variety produces not very acidic, rather light wines, with a deep color. The sugar accumulation potential of this variety is average.
Clonal selection in France

The only certified Mornen clone carries the number 1260.
Bibliographic references