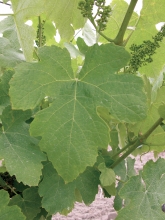 This variety is originally from the west of France and base on published genetic analyses, it is probably a descendant of Gouais blanc.
Synonyms

In France, Montils is officially listed in the "Catalogue of vine varieties" on the A list and classified.
Use

The identification is based on:
- the tip of the young shoot with a high density of prostrate hairs,
- the yellow young leaves,
- the dark green adult leaves, with five lobes, U-shaped lateral sinuses, a closed petiole sinus with slightly overlapping lobes or parallel sides, short teeth compared to their width at the base, no anthocyanin coloration of veins, a smooth flat or slightly involute leaf blade, and on the lower side of the leaves, a medium density of erect and prostrate hairs,
- the round-shaped berries.
Genetic profile

This variety is not very vigorous and should be moderately pruned. Its fairly early budburst exposes it to the risk of spring frosts.
Susceptibility to diseases and pests

Montils is susceptible to grey rot when the grapes reach maturity. It is however not very sensitive to wood diseases.
Technological potentiality

The bunches are medium in size and the berries are small to medium. Distilling Montils wines produces good quality spirits. Musts obtained from this grape variety can be used to make mistelles.
Clonal selection in France

The three certified Montils clones carry the numbers 984, 985 and 986. A conservatory of almost 130 clones was planted in the French department of Charente in 2004.
Bibliographic references