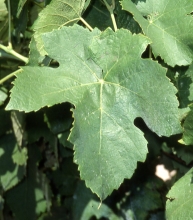 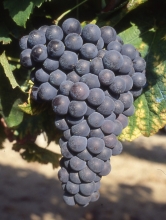 This variety is originally from the Savoie region. Based on genetic analyses carried out in Montpellier, Mondeuse would be the result of a crossbreeding between Mondeuse blanche and Tressot.
Synonyms

In France, Mondeuse is officially listed in the "Catalogue of vine varieties" on the A list and classified.
Use

The identification is based on:
- the tip of the young shoot with a high density of prostrate hairs,
- the yellow young leaves,
- the pentagonal adult leaves, with three or five lobes, a slightly open or closed petiole sinus, an elongated main lobe, short teeth with straight or convex sides, no anthocyanin coloration of veins, a finely blistered twisted leaf blade, and on the lower side of the leaves, a low density of erect and prostrate hairs,
- the round-shaped berries.
Genetic profile

Mondeuse has good vigor and must be pruned short. Mondeuse is however susceptible to chlorosis and to drought. It is well adapted to clay-limestone screes and stony hillsides.
Susceptibility to diseases and pests

Mondeuse is not very susceptible to grey rot and to phomopsis. However, it is sensitive to mites, powdery and downy mildew.
Technological potentiality

The bunches are medium to large size and the berries are medium in size. Mondeuse produces very characteristic, tannic, colored, fragrant wines that are suited to ageing. This variety's sugar potential is moderate with a good acidity.
Clonal selection in France

A conservatory of twenty or so clones was planted in the French department of Savoie between 2014 and 2015.