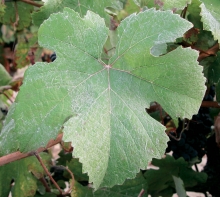 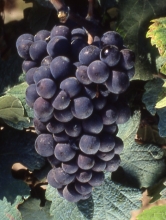 This variety is a mutation of Pinot, particularly focusing on villosity.
Synonyms

In France, Meunier is officially listed in the "Catalogue of vine varieties" on the A list and classified. This variety is also listed in the catalogues of other Member States of the European Union: Austria, Belgium, Bulgaria, Czech Republic, Germany, Italy, Netherlands and Spain.
Use

This variety is rather productive and is resistant to winter frosts. Its fruitfulness is also fairly good following a spring frost. Meunier has a tendency to grow many off shoots and suckers. This variety is well suited for limestone terroirs and is not very sensitive to chlorosis.
Susceptibility to diseases and pests

Meunier is not very sensitive to phomopsis, powdery mildew and downy mildew. On the other hand, it is susceptible to grape moths and grey rot.
Technological potentiality

The bunches are small and the berries very small. This variety is used especially for the production of sparkling wines. It maked moderately acidic wines which evolve quickly.
Clonal selection in France