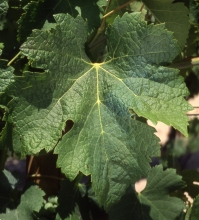 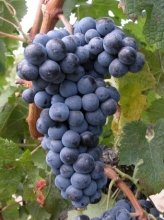 This variety is originally from the Bordeaux vineyards. Based on genetic analyses, Merlot would be the result of crossbreeding Cabernet franc and Magdeleine noire des Charentes.
Synonyms

In France, Merlot is officially listed in the "Catalogue of vine varieties" on the A list and classified. This variety is also listed in the catalogues of other Member States of the European Union: Austria, Belgium, Bulgaria, Croatia, Cyprus, Czech Republic, Germany, Greece, Hungary, Italy, Malta, Portugal, Romania, Slovenia and Spain.
Use

The identification is based on:
- the tip of the young shoot with a high density of prostrate hairs,
- the green young leaves,
- the shoots with green internodes,
- the wedge-shaped dark green adult leaves, with five or seven lobes, an open U-shaped petiole sinus, with sometimes naked petiole veins, medium teeth with straight or convex sides, no anthocyanin coloration of veins, a goffered, very blistered leaf blade, and on the lower side of the leaves, a low to medium density of prostrate hairs,
- the round-shaped berries.
Genetic profile

Merlot is a moderately to strongly vigorous variety that tends to produce a lot of off shoots and suckers. Its semi-erect to horizontal bearing requires sufficient trellising. Its fertility is good and it is better to prune it short. In certain climatic conditions, there is a risk of coulure. Merlot is well suited to clay-limestone terroirs. This variety is rather sensitive to winter and spring frosts (early budburst) and appears to be not very adapted to intense drought conditions.
Susceptibility to diseases and pests

Merlot is particularly sensitive to downy mildew (on flowers and bunches), to vine leafhoppers and burls. It is also rather sensitive to grey rot. On the other hand, it is not very susceptible to powdery mildew and flavescence dorée and is not very affected by wood diseases.
Technological potentiality

The bunches are small to medium in size, winged and berries are medium in size. Merlot produces round, powerful, rich in alcohol and colored wines with relatively low acidity. These full-bodied and structured wines, with rather supple tannins, can be aged in wood barrels. The aromas are complex and elegant.
Clonal selection in France