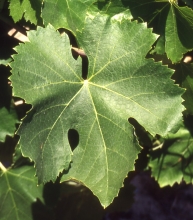 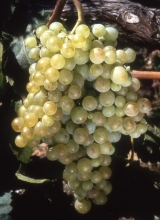 This variety could originally be from North Africa where it is called Farana.
Synonyms

In France, Mayorquin is officially listed in the "Catalogue of vine varieties" on the A list and classified. This variety is also listed in the catalogue of other Member States of the European Union : Italy, Portugal and Spain.
Use

The identification is based on:
- the tip of the young shoot with a very high density of prostate hairs,
- the yellow young leaves,
- the shoots with a flattened or fasciated internode cross section,
- the large light green adult leaves, with five lobes, a slightly open petiole sinus or with slightly overlapping lobes, with often a tooth on the edge, medium teeth with straight sides, no anthocyanin coloration of veins, colored petioles, a smooth shiny involute leaf blade, and on the lower side of the leaves, a medium density of erect and prostate hairs,
- the round-shaped or ellipsoid berries.
Genetic profile

Mayorquin is very vigorous, fertile and productive and must be pruned short. Mayorquin is well adapted to dry, sandy or clay soils.
Susceptibility to diseases and pests

Mayorquin is especially susceptible to downy mildew. It is not very sensitive to grey rot.
Technological potentiality

The only certified Mayorquin clone carries the number 1119.
Bibliographic references