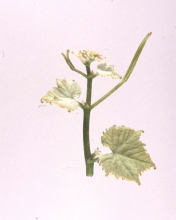 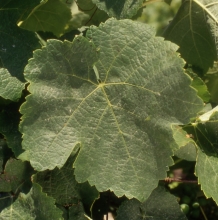 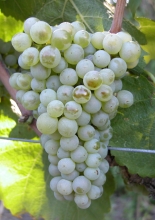 This variety would appear to origianlly be from the Gaillac region (Tarn).
Synonyms

In France, Mauzac is officially listed in the "Catalogue of vine varieties" on the A list and classified.
Use

The identification is based on:
- the tip of the young shoot with a very high density of prostrate hairs,
- the white or yellow young leaves,
- the shoots with green internodes,
- the circular or cordate adult leaves, entire or with three lobes, a petiole sinus with overlapping lobes, short or medium teeth with convex sides, no anthocyanin coloration of veins, a matte slightly hammered leaf blade, and on the lower side of the leaves, a medium density of prostrate hairs,
- the round-shaped or broad ellipsoid berries.
Genetic profile

Mauzac displays moderate vigor, is rather productive and must be pruned short. Grape clusters have short peduncles. This variety produces good results in clay-limestone or limestone soils.
Susceptibility to diseases and pests

Mauzac is sensitive to mites (particularly to acariosis), grape moths, phomopsis, eutypa dieback and grey rot. It is however not very susceptible to powdery and downy mildew.
Technological potentiality

The bunches and berries are medium in size. Mauzac produces sparkinlg, sweet or dry white wines. At full maturity, the alcohol level is fairly high and the berries can be further enriched by over-ripening. Acidity, on the other hand, drops quickly. The wines sometimes lack freshness (sensitivity to oxidation) and can have some bitterness. The dominant aromas are, in general, apple and sometimes pear.
Clonal selection in France