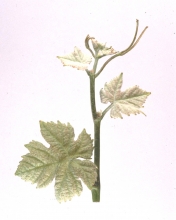 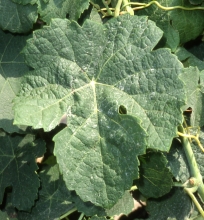 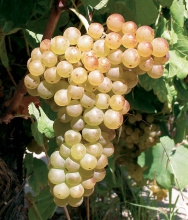 This variety is originally from the Northern Côtes du Rhône region.
Synonyms

In France, Marsanne is officially listed in the "Catalogue of vine vareties" on the A list and classified. This variety is also listed in the catalogues of other Member States of the European Union: Bulgaria, Cyprus and Italy.
Use

The identification is based on:
- the tip of the young shoot with a high density of prostrate hairs,
- the green or yellow young leaves,
- the shoots with green internodes,
- the large adult leaves, with three or five lobes, a petiole sinus with very overlapping lobes, very short teeth compared to their width at the base with convex sides, no anthocyanin coloration of veins, a matte, goffered, strongly blistered and twisted leaf blade, and on the lower side of the leaves, a low density of erect and prostrate hairs,
- the round-shaped berries, golden or reddish when ripe.
Genetic profile

This variety is vigorous, fertile and productive. It must be pruned short and reserved, preferably, for not very fertile and stony terroirs. Marsanne produces long shoots which require careful and sufficient training. This variety is rather rustic, with a short cycle, a late budburst and is well adapted to cool climatic areas.
Susceptibility to diseases and pests

Marsanne's bunches are large but the berries are small. Marsanne produces sparkling or dry white wines, rather elegant, moderately or not very acidic with fine aromas and sometimes presenting a light harshness or bitterness on the finish. A badly managed production may adversely affect the wine quality.
Clonal selection in France

The three certified Marsanne clones carry the numbers 574, 1036 and 1083. A conservatory of almost 250 clones was planted in 2001 in the Côtes du Rhône region.
Bibliographic references