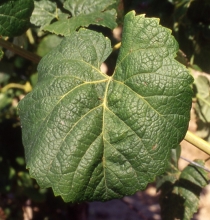 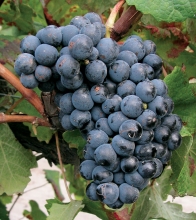 This variety is originally from the Western Pyrenees.
Synonyms

In France, Manseng noir is officially listed in the "Catalogue of vine varieties" on the A list and classified.
Use

The identification is based on:
- the tip of the young shoot with a very high density of prostrate hairs,
- the reddish young leaves with very bronze spots,
- the circular or wedge-shaped dark green adult leaves, entire or with three lobes, with deep lateral sinuses, an open U-shaped petiole sinus, with sometimes naked petiole veins, short to medium teeth compared to their width at the base with straight sides, no anthocyanin coloration of veins, a revolute, blistered, goffered or undulate between the veins near the petiole sinus leaf blade, and on the lower side of the leaves, a low density of erect and prostrate hairs,
- the round-shaped berries.
Genetic profile

Manseng noir is a vigorous variety, not very fertile on the buds of the base, which must be pruned long. However, if not well managed, this variety can produce high yields. Manseng noir adapts well to various soil types.
Susceptibility to diseases and pests

This variety does not seem particularly sensitive to diseases and pests.
Technological potentiality

The bunches are medium to large, fairly loose and the berries are small to medium size. Manseng noir produces extremely colored wines with a beautiful dark ruby color. The wines are astringent, slightly acidic but fine and suited to ageing; interesting for blendings.
Clonal selection in France

The only certified Manseng noir clone carries the number 897. A conservatory of thirty or so clones was planted in the French department of Pyrénées-Atlantiques in 2013.
Bibliographic references