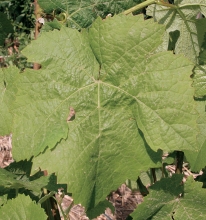 This table grape variety was obtained by Moreau-Robert in 1845 in the Loire Valley region. Based on genetic analyses carried out in Montpellier, Madeleine royale would be the result of the crossbreeding between Frankenthal and Pinot.
Synonyms

In France, Madeleine royale is officially listed in the "Catalogue of vine varieties" on the A list.
Use

The identification is based on:
- the tip of the young shoot with a high density of prostrate hairs,
- the yellow young leaves,
- the circular adult leaves, with five lobes, moderately deep lateral sinuses, a U-shaped petiole sinus with overlapping lobes, small short teeth with straight or convex sides, no anthocyanin coloration of veins, a strongly blistered, twisted, sometimes goffered leaf blade, and on the lower side of the leaves, a low density of erect and prostrate hairs,
- the round-shaped or broad ellipsoid berries.
Genetic profile

Bud burst: same as Chasselas.
Grape maturity: very early season, 1 week and a half before Chasselas.
Suitability for cultivation and agronomic production

Madeleine royale is moderately vigorous, with a semi-erect bearing and can be pruned short.
Susceptibility to diseases and pests

The bunches are medium in size and compact. The berries are also medium in size, simple-flavored, with a thin skin and a juicy pulp. This variety has a bad storage and transport capacity.
Clonal selection in France