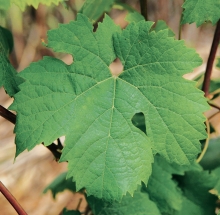 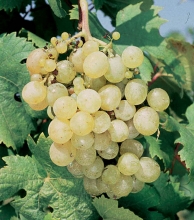 This table grape variety was obtained by Mr. Vibert in 1857 in Angers. Based on genetic analyses carried out in Montpellier, this variety would be the result of the crossbreeding between Madeleine royale and Blanc d’Ambre.
Synonyms

In France, Madeleine angevine is officially listed in the "Catalogue of vine varieties" on the A list. This variety is also listed in the catalogues of other Member States of the European Union: Denmark and Sweden.
Use

Surfaces of all Madeleines, except Madeleine royale.
Descriptive elements

The identification is based on:
- the tip of the young shoot with a high density of prostrate hairs,
- the green young leaves with bronze spots,
- the circular adult leaves, with five or seven lobes, very deep lateral sinuses, an open or slightly open U-shaped petiole sinus, with sometimes naked petiole veins, short teeth with straight sides, a weak anthocyanin coloration of veins, a strongly blistered, twisted and goffered leaf blade, and on the lower side of the leaves, a medium density of erect and prostrate hairs,
- the female flowers,
- the ellipsoid berries.
Genetic profile

The bunches are small and loose. The berries are medium in size, simple-flavored, with a moderately thick skin and a soft pulp.
Clonal selection in France