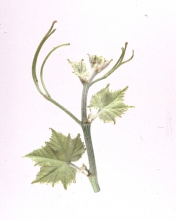 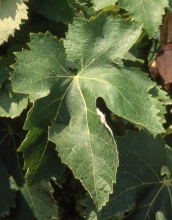 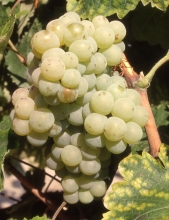 This variety is originally from Spain, probably from Catalonia. Based on published genetic analyses, Macabeu would be the result of crossbreeding Gibi and Brustiano faux.
Synonyms

In the European Union, Macabeu is officially called by other names: Macabeo (Spain), Maccabeau (Greece) and Viura (Spain). These synonyms are officially recognized in France regarding plant propagation material.
Legal information

In France, Macabeu is officially listed in the "Catalogue of vine varieties" on the A list and classified. This variety is also listed in the catalogues of other Member States of the European Union: Greece and Spain.
Use

The identification is based on:
- the tip of the young shoot with a very high density of prostrate hairs,
- the shoots with internodes which are often flattened and fasciated,
- the large light green adult leaves with five lobes, a slightly open or closed petiole sinus, no anthocyanin coloration of veins, a shiny involute on the edges leaf blade, and on the lower side of the leaves, a high density of prostrate hairs,
- the round-shaped berries.
Genetic profile

Macabeu is a productive, vigorous variety with an erect bearing and must be pruned short. It is sensitive to the wind. Planting in cool and humid areas, along with too dry soil should be avoided as the variety can be subject to apoplexy and early leaf drop.
Susceptibility to diseases and pests

Macabeu is rather sensitive to mites, grey rot and bacterial necrosis.
Technological potentiality

The bunches are very large and the berries medium to large in size. Depending on growing conditions, Macabeu can be used to produce sparkling wines, sweet wines or dry white wine. The dry white wines and sparkling wines are light, pleasant but are often lacking acidity and a bit of finesse. The aromas (sometimes with fennel notes) are also not very intense.
Clonal selection in France