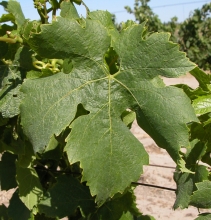 Based on published genetic analyses, this variety was obtained in 1882 by Hermann Müller in Germany and would be the result of the crossbreeding between Riesling and Madeleine royale.
Synonyms

In France, Müller-Thurgau is officially listed in the "Catalogue of vine varieties" on the A list and classified. This variety is also listed in the catalogues of other Member States of the European Union: Austria, Belgium, Bulgaria, Croatia, Cyprus, Czech Republic, Germany, Hungary, Italy, Luxembourg, Portugal, Slovakia and Slovenia.
Use

The identification is based on:
- the tip of the young shoot with a medium density of prostrate hairs,
- the medium circular adult leaves, with five lobes, U-shaped deep lateral sinuses, a slightly open or closed petiole sinus, with often naked petiole veins, teeth with straight sides, no anthocyanin coloration of veins, a twisted, slightly goffered leaf blade, and on the lower side of the leaves, a low density of erect hairs,
- the ellipsoid berries, simple or slightly aromatic flavored.
Genetic profile

Müller-Thurgau is rather vigorous and is sensitive to chlorosis. It is preferable to plant this variety in sufficiently rich soil. Its very short cycle makes this variety well suited for northern or mountain areas, cold and limit from a climatic point of view. However, its resistance to winter cold is moderate.
Susceptibility to diseases and pests

The bunches and berries are small or small to medium in size. Müller-Thurgau can produce aromatic, not very acidic and sometimes heavy wines with fairly high alcoholic degree and can sometimes lack finesse.
Clonal selection in France