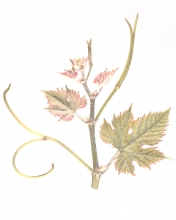 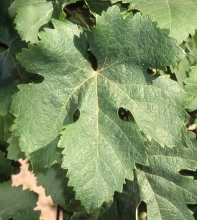 This variety is of Spanish origin (Andalusia).
Synonyms

In France, Listan is officially listed in the "Catalogue of vine varieties" on the A list and classified. This variety is also listed in the catalogues of other Member States of the European Union: Cyprus, Portugal and Spain.
Use

The identification is based on:
- the tip of the young shoot with a very high density of prostrate hairs,
- the yellow young leaves with bronze spots,
- the shoots with red internodes,
- the large adult leaves, with five lobes, deep lateral sinuses, an open petiole sinus, medium teeth with convex sides, a moderate anthocyanin coloration of veins, a blistered leaf blade, and on the lower side of the leaves, a high density of erect and prostrate hairs,
- the round-shaped or obloid berries, with a dark hilum.
Genetic profile

Listan is vigorous, very productive, susceptible to browning and must be pruned short.
Susceptibility to diseases and pests

This variety is a little susceptible to powdery mildew and grey rot.
Technological potentiality

Listan's bunches are very large and the berries are medium to large in size. Listan has a low sugar potential and the acidity drops quickly and sharply at maturity. Wines produced are neutral and sensitive to oxidation.
Clonal selection in France

The only certified Listan clone carries the number 367.
Bibliographic references