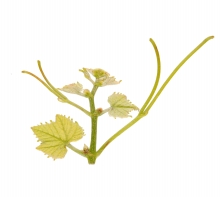 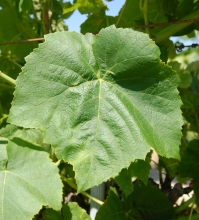 Lakemont has been obtained by J. Einset in 1972 in the United States of America. This interspecific hybrid would result from a crossbreeding between Ontario and Sultanine.
Synonyms

In France, Lakemont is officially listed in the "Catalogue of vine varieties" since 2017 on the A list.
Use

The identification is based on:
- the green tip of the young shoot with a medium density of prostate hairs,
- the green yellow young leaves, with a low to medium density of prostate hairs,
- the shoots with green or red-striped internodes,
- the pentagonal, dark green, entire adult leaves, with a closed petiole sinus with overlapping lobes, mucronate teeth, very short compared to their width at the base with convex sides, no anthocyanin coloration of veins, a flat, goffered, finely blistered leaf blade, undulate between the veins, and on the lower side of the leaves, no or a very low density of erect and prostate hairs,
- the ellipsoid berries.
Genetic profile

Lakemont is productive, moderately vigorous and has a semi-erect bearing.
Susceptibility to diseases and pests

Lakemont is a little sensitive to downy mildew and powdery mildew, and it is sensitive to phomopsis.
Technological potentiality