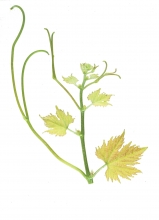 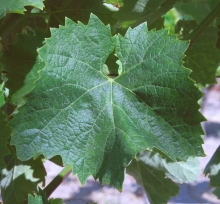 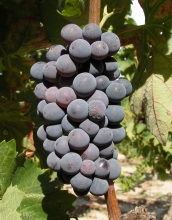 This variety is originally cultivated in Hungary and in the Balkans that could be of Ottoman origin.
Synonyms

In France, this variety can officially be called "Gamza" regarding plant propagation material. In Austria, Bulgaria, Croatia and Hungary, Kadarka is officially designated as "Gamza".
Legal information

In France, Kadarka is officially listed in the "Catalogue of vine varieties" since 2013 on the A list and classified. This variety is also listed in the catalogues of other Member States of the European Union: Austria, Bulgaria, Croatia, Hungary and Romania.
Use

The identification is based on:
- the tip of the young shoot, with a high density of prostrate hairs and a piping anthocyanin coloration,
- the yellow young leaves with bronze spots and a medium density of prostrate hairs,
- the circular, medium to large, dark green adult leaves, entire or with three or five lobes, with shallow lateral sinuses, a slightly open or closed V-shaped petiole sinus, with sometimes overlapping lobes, rather large teeth, long compared to their width at the base with straight or convex sides, no anthocyanin coloration of veins, a thick, involute or sometimes twisted, blistered and goffered leaf blade, and on the lower side of the leaves, a medium to high density of erect hairs and a low to medium density of prostrate hairs,
- the round-shaped berries.
Genetic profile

Kadarka is a vigourous and productive variety with a semi-erect bearing. It must be pruned short to avoid leaves crowding and humidity accumulation in the area of the bunches. If it is pruned long, Kadarka tends to become depleted. This variety tolerates drought conditions but is susceptible to winter frosts.
Susceptibility to diseases and pests

Kadarka is mostly sensitive to grey rot on the bunches.
Technological potentiality

Kadarka's bunches are medium in size and rarely winged. The berries are also medium in size, simple-flavored, with a thin skin and a juicy pulp. In favorable climatic conditions and if the yields are manages, Kadarka gives aromatic wines with a good tannic structure, a nice alcohol level, but that are not very colored. This variety can also be used to produce rosé wines and sweet wines from raisined grapes.
Clonal selection in France

The only certified Kadarka clone carries the number 1181.
Bibliographic references