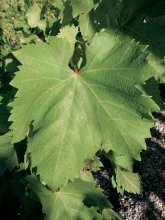 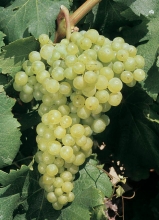 This table grape variety is originally from the Roussillon region.
Synonyms

In France, Jaoumet is officially listed in the "Catalogue of vine varieties" on the A list.
Use

The identification is based on:
- the tip of the young shoot with a high density of prostate hairs,
- the yellow young leaves,
- the circular adult leaves, with three, five or seven lobes, deep lateral sinuses, an open U-shaped petiole sinus, medium teeth with straight sides, a weak anthocyanin coloration of veins, a smooth twisted leaf blade, and on the lower side of the leaves, no erect hairs and a low density of prostate hairs,
- the round-shaped berries.
Genetic profile

Jaoumet is an early variety, moderately vigorous with a semi-erect bearing which can be pruned short. Jaoumet has shown to be incompatible with the 57 Richter rootstock.
Susceptibility to diseases and pests

The only certified Jaoumet clone carries the number 1319.
Bibliographic references