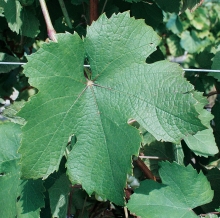 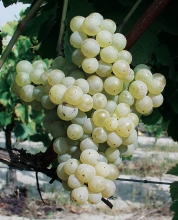 This variety native to the Savoie region is, based on published genetic analyses, probably a descendant of Gouais blanc.
Synonyms

In France, Jacquère is officially listed in the "Catalogue of vine varieties" on the A list and classified. This variety is also listed in the catalogue du Portugal.
Use

The identification is based on:
- the tip of the young shoot with a high density of prostrate hairs,
- the green young leaves with bronze spots,
- the adult leaves with three or five lobes, an open V-shaped petiole sinus, long teeth compared to their width at the base with straight sides, a moderate to strong anthocyanin coloration of veins, an involute leaf blade, and on the lower side of the leaves, a low density of prostrate hairs,
- the round-shaped berries.
Genetic profile

Jacquère is fairly fertile, regularly productive with moderate vigor. It is better to pune it short. Jacquère is well adapted to clay-limestone and rocky scree terroirs.
Susceptibility to diseases and pests

This variety is susceptible to black rot and grey rot but is less sensitive to downy and powdery mildew.
Technological potentiality

The bunches and berries are medium in size. Jacquère produces wines that are pale, light (slightly floral), lively (acidic, but with pleasant freshness), often with a sparkling note. These wines need to be consumed quickly.
Clonal selection in France

The five certified Jacquère clones carry the numbers 569, 658, 769, 788 and 923. A conservatory of more than 70 clones was planted in the French department of Savoie in 2015.
Bibliographic references