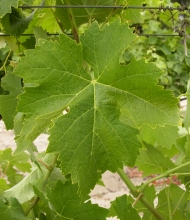 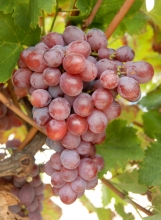 This variety corresponds to a red mutation of Italia which appeared in Brazil.
Synonyms

In France,Italia Rubi is officially listed in the "Catalogue of vine varieties" on the A list.
Use

The description corresponds to that of Italia, except for the skin color of the berries, which is in this case red when ripe.
Genetic profile

Italia Rubi is sensitive to millerandage and slightly sensitive to dessication of the stems. It is a vigorous variety, with a semi-erect bearing, that must be trained and pruned long.
Susceptibility to diseases and pests

The bunches are large, conical-shaped and moderately compact. The berries are also large but sometimes, the size and color are not homogeneous. The skin is moderately thick and the pulp in fleshy. The flavor is pleasant, slightly muscaté.
Clonal selection in France