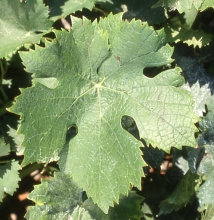 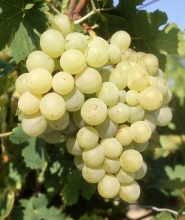 In France, Gros Vert is officially listed in the "Catalogue of vine varieties" on the A list and classified. It is classified as a wine grape variety only in some French department (see the regulations in force). This variety is also listed in the catalogue of Italie.
Use

The identification is based on:
- the tip of the young shoot with a low to medium density of prostrate hairs,
- the yellow young leaves,
- the shoots with green or slightly red-striped internodes,
- the small or medium adult leaves, with five or seven lobes, deep lateral sinuses, a slightly open or closed petiole sinus, long teeth compared to their width at the base with straight sides, no anthocyanin coloration, an involute leaf blade, and on the lower side of the leaves, a very low density of erect hairs,
- the broad ellipsoid or round-shaped berries.
Genetic profile

This late grape variety is sufficiently fertile to be pruned short. It is susceptible chlorosis.
Susceptibility to diseases and pests

The bunches and berries are large. The skin is thick and the pulp is fleshy with a simple flavor. Gros vert has a good transport and storage capacity. The wines produced are light and not very alcoholic. It can be used for the production of sparkling wines.
Clonal selection in France