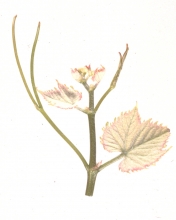 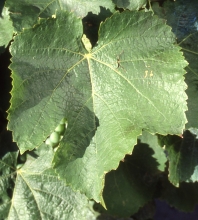 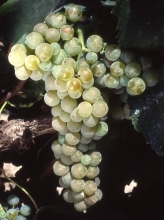 This variety is originally from the Pyrenees vineyards.
Synonyms

In France, Gros Manseng is officially listed in the "Catalogue of vine varieties" on the A list and classified. This variety is also listed in the catalogues of other Member States of the European Union: Bulgaria and Spain.
Use

From 1958 to 1988, surfaces include Gros and Petit Manseng.
Descriptive elements

The identification is based on:
- the green or yellow young leaves,
- the shoots with green internodes,
- the circular, entire adult leaves, with a petiole sinus with slightly overlapping lobes, short teeth with convex sides, no anthocyanin coloration of veins, a slighlty goffered leaf blade, involute and slightly curly on the edges, and on the lower side of the leaves, a low to medium density of prostrate hairs,
- the round-shaped berries.
Genetic profile

This vigorous variety is rather fertile. Generally pruned long, Gros Manseng can also be pruned short.
Susceptibility to diseases and pests

Gros Manseng is sensitive to powdery mildew. It has a good resistance to grey rot and grapes conserve well on the vine trunk to obtain sweet wines.
Technological potentiality

The bunches are medium in size while the berries are very small. This variety has a good sugar accumualation potential while maintaining high acidity. It can produce high quality dry and sweet wines.
Clonal selection in France